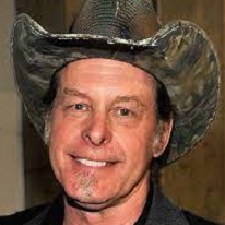 Ted Nugent is a patriot.

Theodore “Ted” Anthony Nugent (a.k.a. Ted Nugent) is a patriot.

Ted Nugent has more patriotism in his pinky than most people have in their whole body. It’s thanks to guys like him that you still have your right to bear arms.

Some people have done a lot of bashing on how Nugent feels about the war in Iraq, but nowhere have I’ve seen where they had a solution to the problem. Their opinions scream “left-wing wacko.” They want to complain about the problem but have no solution. At least Nugent has taken a stand whether it be right or wrong. Sure Nugent has done some crazy stuff, all of us have. Nowadays, I guess things don’t have to be factual to make it into the newspapers or television. Just know that every time they write garbage they’re doing their part in lowering the country’s morale. In turn, we should all give thanks to Ted Nugent for his strong patriotism.

Every American should proudly recognize . . . patriot Ted Nugent for his ongoing support of our troops through his performances and other charitable patriotic efforts.

With over 30 million albums sold, Ted Nugent has not only earned his status as an American music icon . . . he has used it to bring smiles, enjoyment, and a helping hand to our valiant, proud troops in performance tours in association with the USO and other organizations.

Ted Nugent and his wife, Shemane, also founded the Freedom’s Angels Foundation to support our brave troops. In Ted’s own words…

“As the Nugent family spent more time with US hero soldiers who have sacrificed so much, yet remained in need of special attention and specialized medical and rehabilitation equipment, we were compelled to show our appreciation and gather support for these great warriors for freedom . . . The Freedom’s Angels charity was formed to bring relief, joy and a heartfelt salute to those most deserving.”

Ted’s humanitarian and patriotic efforts has earned him numerous commendations from state police, sheriff departments, FBI and police agencies nationwide . . . and he has been lauded for his Ted Nugent Kamp for Kids, his work as a national spokesman for D.A.R.E, and for his work with the U.S. Military.

Ted Nugent is also an avid supporter of the USO and encourages other stars to do the same. In Ted’s own words again…

“It’s surprising how little you hear about the USO back in the States . . . especially, when you consider that it’s such an awesome, compassionate, generous and positive force . . . What Bob Hope did during World War II, and the Korean War, and Vietnam, and what Robin Williams and Kid Rock and Toby Keith are doing . . . I’m moved to be a part of that.”

Ted Nugent addressing a person in a live chat who wrote, “Nugent was a sex offender!”, Ted replied:

“I shouldn’t have even acknowledged that dirtbag, but they keep at it, they are just drunk on hate and lies. It’s just hysterical.

“I’ve adopted some dogs and turned them into great hunting dogs, by the way. See the lies, just make up the nastiest shit you can. And how about Fauci? Who would believe this prick? Really? Who would believe Joe Biden stumbling to form a thought?

“Here’s the bottom line – people ask, ‘When should we fight back?’ Every day! I fight back every day! I call my elected employees in all 50 states because I rock ‘n’ roll and I hunt, and I’m an American, so all 50 states’ mayors, senators, congressmen, and governors – they work for me.

“And they all know what I expect – constitutional accountability. You need to call your mayor, your senator, and your congressman at least weekly. Tell them that we know Joe Biden didn’t win the election, we saw the footage of them ghosting suitcases and boxes of mail-in ballots, which the Democrats manipulated with the help of the media and academia in Hollywood.

“Watch Biden embarrass himself every time you see or hear him, and tell me he got more votes than Barack Obama, who was the ultimate scam artist and really scammed us good. And we voted for him. I didn’t. But plenty of people did.

“But why didn’t they speak up and expose the gangster James Comey? And how do you go into building every day, it says J. Edgar Hoover over the entrance! Really? And who trusts anybody in a bureaucracy that deals with tobacco and guns and alcohol and stuff? What kind of bureaucracy is that?