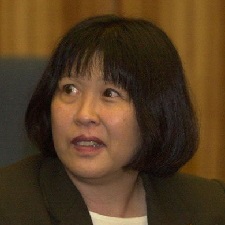 Susan Oki Mollway is a treasonous federal district judge on the United States District Court for the District of Hawaii.

Federal Judge Susan Oki Mollway is doing everything she can to nullify what the voters of Maui legally created on Election Day 2014.

In an historic effort, those voters passed a ballot measure temporarily blocking Monsanto and Dow from continuing their toxic GMO and pesticide experiments in the “open-air laboratory” of Maui.

Monsanto and Dow then turned around and sued to nullify that vote, and the County Government of Maui, betraying their own citizens, joined forces with the two corporate behemoths.

Judge Mollway now has the case before her.

In her very latest stalling move, she’s postponed any action until June 15, 2015. Meanwhile, Monsanto and Dow are allowed to continue poisoning the people of Maui.

Mollway’s justification for her latest stall? Between now and June 15, the Hawaii State Legislature MIGHT pass a bill that decides the future of Dow and Monsanto on Maui and thus overrides Maui voters; and therefore waiting is the best option.

This, despite the fact that the relevant agriculture bills now sitting before the State Legislature are receiving zero attention. At the moment, they’re dead ducks.

So what message is Judge Mollway really sending? It’s obvious. She’s nudging and winking at the Legislature, hoping they revive one of these bills or invent a new one and pass it. Soon.

She wants such a bill to make it clear that Monsanto and Dow can continue their GMO/pesticide experiments without interruption, regardless of what the voters of Maui have decided. She wants to destroy the ability of a vote to make any difference.

Since when does a sitting Federal Judge postpone making a judicial decision because another branch of government (the legislature) might enact a law?

In case you’ve forgotten, there are three branches of government, and they’re supposed to limit each other’s power.

What Mollway is doing is treasonous and absurd.

This would be like the US Supreme Court stating, “We are about to enter another round of decision-making on Obamacare—but we’re going to wait, because the Congress might possibly enact new legislation that clarifies the points we’re supposed to debate…”

Yes. Might. Possibly. And a hundred UFOs might land on Maui in early June and render, de facto, all governmental decisions null and void.

Why doesn’t Mollway just come out and say, “Look, there is no way I’m going to stop Monsanto and Dow from doing what they’ve been doing on Maui. I’ll employ any strategy to accomplish my objective. If anyone has suggestions on how I can achieve this, please email me. I’m open to all ideas. For example, the Maui voters were temporarily disabled on Election Day because a solar flare hit Hawaii and caused synaptic chaos. Or, Monsanto is actually a group of messianic extraterrestrials here to save us…”

Better yet, Mollway could simply declare Maui a judicial monarchy, appoint herself Queen, and cancel all voting privileges.

Under the cover of court gibberish and rigamarole, that’s what she’s doing.

Is there an appeals court that’s ready to push her off the case and off the bench? Or are they working for Monsanto, too?