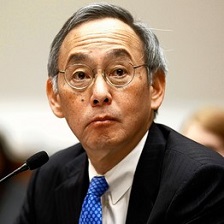 “The final decisions on Solyndra were mine,” said Secretary of Energy Steven Chu in his testimony before the House Energy and Commerce Oversight Committee on November 17, 2011. And this should be his political epitaph. Chu’s decision to pour $528 million tax dollars into a failing green energy boondoggle that went belly-up in 2011 is indefensible and corrupt, especially in light of the fact that Solyndra’s key investor (Tulsa billionaire George Kaiser) also happens to be a major Obama campaign donor.

On March 12, 2012, Rep. Darrell Issa’s (R-CA) Energy and Oversight Committee exposed the full extent of Chu’s incompetence and corruption in a report citing “numerous examples of dysfunction, negligence and mismanagement by DOE [Department of Energy] officials, raising troubling questions about the leadership at DOE and how it has administered its loan guarantee programs.” The report accused Chu’s DOE of having “turned a blind eye to the risks that have been glaringly apparent since the inception of the program.”

Whether Chu indeed made the “final” decision on Solyndra, or is simply protecting the president and his donor, this is a scandal of a major magnitude. And yet, it is only the tip of the iceberg. As Peter Schweizer, author of the book Throw Them All Out wrote, “According to the Department of Energy’s own numbers … In the 1705 government-backed-loan [green energy] program, $16.4 billion of the $20.5 billion in loans granted … went to companies either run by or primarily owned by Obama financial backers—individuals who were bundlers, members of Obama’s National Finance Committee, or large donors to the Democratic Party.”