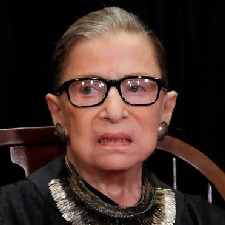 Ruth Bader Ginsburg’s has a secular progressive and anti-Constitution philosophy. . .

The basis of her sex is used to hide the facts behind the treasonous overt acts that live within Ruth Bader Ginsburg. Her actions are far from a heroic fight for women’s rights, it’s a bizarre concoction of radical feminist angst and ideology that ignores originalist interpretations of the Constitution in favor of reliance on international law, foreign court decisions, and a flagrantly political agenda.

We need only look at her 230-page book, called Sex Bias in the U.S. Code, published in 1977 by the U.S. Commission on Civil Rights, to see elements of her radical philosophy:

The purpose of this book was to show how the proposed Equal Rights Amendment (for which she was an aggressive advocate) would change federal laws to make them sex-neutral and “eliminate sex-discriminatory provisions.”

Ginsburg called for the sex-integration of prisons and reformatories so that conditions of imprisonment, security and housing could be equal. She explained, “If the grand design of such institutions is to prepare inmates for return to the community as persons equipped to benefit from and contribute to civil society, then perpetuation of single-sex institutions should be rejected.” (Page 101)[.] …

Ginsburg called for reducing the age of consent for sexual acts to people who are “less than 12 years old.” (Page 102)

She objected to laws against prostitution because “prostitution, as a consensual act between adults, is arguably within the zone of privacy protected by recent constitutional decisions.” (Page 97) …

Ginsburg wrote that the Mann Act (which punishes those who engage in interstate sex traffic of women and girls) is “offensive.” Such acts should be considered “within the zone of privacy.” (Page 98)

Ginsburg is no fan of President Trump, which is why she refuses to retire, but is a fan of bypassing the U.S. Constitution. If we needed another reminder of why it matters who is elected president and who gets to pick not only the replacement for Justice Antonin Scalia, Justice Ruth Bader Ginsburg reminds us. In statements to CNN and the New York Times during the 2016 presidential election, Ginsburg called the presumptive GOP presidential nominee a “faker” and warned of the danger of a Trump administration to SCOTUS and the country. As ABC News reported:

“He is a faker,” Ginsburg said of Trump on Monday on CNN. “He has no consistency about him. He says whatever comes into his head at the moment. He really has an ego[.] … How has he gotten away with not turning over his tax returns? The press seems to be very gentle with him on that.”

She also told the New York Times that a Trump presidency would be unimaginable for the country and the Supreme Court.

She jokingly added that she would move to New Zealand if he were to win the election in November.

She is entitled to her own political views. She is entitled even to use them in forming her court decisions. She is not entitled to use her lifetime appointment to attempt to sway Americans in an election. Her remarks show how far liberals on the Supreme Court and in lower courts have gone beyond interpreting the intent of the Founders in writing the Constitution to using the Supreme Court to advance a political and social agenda. To them, the Constitution is a “living document” written in the sand, not carved into the bedrock of American democracy.

She is one of the justices who advocates incorporating foreign law and foreign constitutions into SCOTUS decisions:

At the beginning of February, Ruth Bader Ginsburg traveled to South Africa, where she gave a public address on “The Value of a Comparative Perspective in Constitutional Adjudication.” She defended the Supreme Court’s recent practice of taking guidance from foreign law when interpreting the U.S. Constitution. She acknowledged that the practice has been criticized. She expressed concern at bills before Congress condemning the practice.

Justice Ruth Bader Ginsburg, in a concurring opinion in Grutter v. Bollinger, affirmed the use of racial preferences in university admissions, citing the fact that the International Convention on the Elimination of All Forms of Racial Discrimination temporarily allows for the “maintenance of unequal or separate rights for different racial groups.” Separate but equal?

Justice Ginsburg shares the view that the Supreme Court is a tool – not for ruling on the law and the Constitution, as the Founders intended, but for social engineering, incorporating foreign laws and opinions. She is a globalist who believes that “we the people” includes the people of Zimbabwe and Sri Lanka. She believes in a “living Constitution” as an Etch-a-Sketch document that can mean, as in Alice in Wonderland, whatever she chooses it to mean.

She is the poster child for judicial activism and legislating from the bench. Therein, she is a traitor.