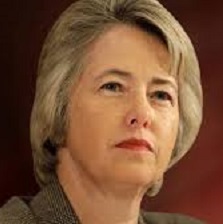 Annise Danette Parker is a traitor.

Annise Danette Parker is a traitor.

Annise Danette Parker is an avower lesbian and mayor of Houston, Texas.

In May 2014, Mayor Annise Parker rammed through the city council a controversial transgender rights measure called the Houston Equal Rights Ordinance (HERO), otherwise known as the “bathroom bill.” It would allow men who self identify as females to use the women’s bathroom and vice versa. Obviously, the ordinance was controversial and five local pastors mounted a successful campaign to gather 50,000 signatures to oppose the measure. This was more than three times the number of signatures necessary to force a voter referendum on the ordinance.

Despite the overwhelming number of signatures gathered, the Houston city attorney dismissed the petitions claiming that there were “irregularities.” Thereafter, a lawsuit was filed by four citizens outraged at such disregard for public sentiment. A court date has been set for January 19, 2015 to decide this matter.

In the meantime, an upset Mayor Annise Parker decided to make these pastors pay for their obstinacy. Her attorneys sent them a subpoena demanding that they turn over any sermons or communications that discussed Mayor Parker, homosexuality, gender identity or related issues.

Such a legal demand is mind boggling, as it clearly disregards the 1st Amendment rights of free speech and places the pulpit in political crosshairs. Politicians have no business intimidating pastors who preach the Word of God. The pastoral message is for the church congregants, not the Mayor of Houston.

After intense nationwide criticism this week, Mayor Annise Parker reduced the scope of the subpoenas to just communications related to the “bathroom bill.” Yet, no subpoena should be recognized as Mayor Annise Parker has no legal authority to mount such a campaign.

Joe La Rue of the Alliance Defending Freedom called the Mayor’s move to limit the subpoena “wholly inadequate.” He noted that the Mayor is still demanding pastoral documents and sermons. La Rue’s group filed a lawsuit in to invalidate the subpoenas since they constitute political “harassment.”

This outrageous episode exposes how liberals like Annise Parker love to use the “separation of church and state” excuse to remove religion from public schools, but ignore the “wall” when they are on a political witch hunt designed to silence religious leaders.

Mayor Annise Parker along with her fellow liberals have a disdain for free speech. Contrary views opposed to issues such as transgender rights are not allowed in this liberal mindset, they should be outlawed. This viewpoint is appropriate for communist Cuba or the old Soviet Union, but not in the United States of America, the “Land of the Free.”

Sadly, political correctness is sweeping the nation from the removal of certain parts of our vocabulary to the desire to institute transgender rights, no matter how many pastors oppose it.

The passage of HERO and the misguided subpoenas indicate the Mayor Annise Parker of Houston has no regard for religious liberty. According to U.S. Senator Ted Cruz (R-TX) the Mayor has “no business asking pastors to turn over their sermons.” He called the subpoenas “un-American” and a “grotesque abuse of power.”

One of the targeted pastors, Hernan Castano, complained that “This is not what America, the nation, is about.” He said the subpoenas amounted to intimidation and that Annise Parker the city mayor has “gone too far.”

Pastor Castano speaks for millions of Americans, who are sick and tired of liberals with their political correctness running amok. Especially the ones like Mayor Annise Parker that are traitors in deliberately refusing to not uphold their oath to protect and defend the Constitution of the United States.

On Oct. 17, 2014 – Houston’s mayor Annise Danette Parker said the city withdrawn subpoenas seeking speeches and other information from five pastors who publicly opposed an ordinance banning discrimination of gay and transgender residents. It was done in coordination with the City attorneys that originally subpoenaed the pastors, seeking speeches, presentations and sermons.

Houston’s Lesbian Mayor Annise Parker is at it again after standing down on subpoenaing pastor’s sermons. We had not heard from her for a few months after she got blasted by pastors and the public following the City Council’s attempts to push through an unlawful “bathroom bill” and the city attorney’s attempts to manipulate signatures in a petitionagainst their illegal actions. However, that has changed. Now she is claiming that the pastors have no right to a jury trial and is calling for a “special master” to investigate.

Though the city withdrew its subpoenas of the pastor’s sermons, something that the pastors called a “head fake,” it has now begun to submit several motions to the court. Among those motions is a request that the state district court not allow the pastors a jury decision and leave the final say in the hands of a single judge.

The plaintiffs pointed out they submitted a timely demand for a jury trial and paid the fee, and therefore are entitled to a jury decision under the Texas Constitution.

They continued: “If the plaintiffs prevail on their claims, then not only is the mayor’s so-called Equal Rights Ordinance temporarily suspended, but the Houston City Council will be required to immediately convene and reconsider whether to repeal the ERO in its entirety. Council’s failure to do so then triggers a duty on behalf of the city to order an election and allow the registered voters of Houston [to] vote on whether the ERO should be repealed or not.”

The city also told the court it wanted a ruling that a special master would be appointed to hear evidence, keeping it out of the hands of a jury or a judge.

“Given the complex and technical nature of the issues presented in this lawsuit, and the difficulty of applying the various legal requirements to plaintiffs deficient but voluminous referendum petition, defendants ask this court to appoint a special master.”

Alliance Defending Freedom has been representing the pastors in the case and will continue to do so. ADF attorney Andy Taylor said of the city and that mayor that they “ought to be ashamed of themselves.”

“Our clients have a constitutional right of free speech, of freedom of religion, freedom to petition government for redress,” he said. “It’s absolutely unbelievable that the mayor in her zeal to defend a ‘gay-lesbian’ ordinance would trample the voting rights of over a million people in Houston.”

And citizens have the right to a trial by a jury of their peers as the Sixth Amendment guarantees. In all criminal prosecutions, the accused shall enjoy the right to a speedy and public trial, by an impartial jury of the State and district wherein the crime shall have been committed, which district shall have been previously ascertained by law, and to be informed of the nature and cause of the accusation; to be confronted with the witnesses against him; to have compulsory process for obtaining witnesses in his favor, and to have the Assistance of Counsel for his defense.

The motion by the city and the mayor should be dead on arrival.