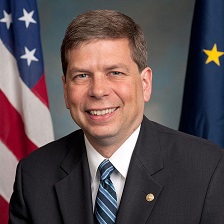 Mark Begich is a patriot.

Mark Peter Begich is a United States Senator from Alaska and a member of the Democratic Party is a patriot.

Mark Begich strongly supports the right to bear arms as guaranteed by the Second Amendment to the U.S. Constitution and protected by the Alaska Constitution.

Mark Begich is a lifetime member of the National Rifle Association, owns firearms and was one of the first Anchorage citizens to obtain a concealed weapons permit when it was required. Most recently, Mark applauded the U.S. Supreme Court’s decision to strike down the District of Columbia’s 32-year-old ban on handguns.

Mark Begich sponsored the Firearms Interstate Commerce Reform Act, allow licensed firearms dealers to sell or deliver any firearm (currently, rifles or shotguns) to any state if the licensee meets with the purchaser and the transaction complies with the laws of the state in which the transfer is conducted and the purchaser’s state of residence; and eliminate the requirement that a licensee must conduct business at a gun show only in the state that is specified on the licensee’s license.

* Provides a 90-day amnesty period during which veterans and their family members can register in the National Firearms Registration and Transfer Record any firearm acquired before October 31, 1968, by a veteran while a member of the Armed Forces stationed outside the continental United States.

* Grants such an individual limited immunity with respect to the acquisition, possession, transportation, or alteration of such firearm before or concurrent with such registration.

* Extends such immunity to a veteran who attempts to register a qualifying firearm outside of the amnesty period if the veteran surrenders the firearm within 30 days after being notified of potential criminal liability for continued possession.

* Transfers each firearm qualifying as a curio or relic which has been forfeited to the United States to the first qualified museum that requests it Publishes information identifying each such firearm which is available to be transferred to a museum.

* Makes a prohibition against transfer or possession of a machine-gun inapplicable to museums.

Mark Begich signed the Concealed Carry Reciprocity Act, it amends the federal criminal code to provide for reciprocity for the carrying of certain concealed firearms in different states by persons who are not prohibited by federal law from possessing, transporting, shipping, or receiving a firearm and who are carrying a valid state license or permit for carrying a concealed firearm; or otherwise entitled to carry a concealed firearm in their state of residence.

Mark Begich, who faces re-election in 2014, ignored Obama and the outright lies from supporters by voting against universal background checks in gun purchases. Despite leftist blathering to the contrary, the ballyhooed background checks expansion would have created a de facto national gun registry, long the dream of those whose ultimate goal is confiscation.

We should all give thanks Mark Begich stood up for what is right. This was a noble act in defending the U.S. Constitution, for he was one of four democrats with the courage to do so.

Mark Begich has since voted in favor of gay marriage, and to give amnesty to illegal immigrants. Although most Americans dislike how he voted on both of these issues, they’re not in direct violation of the United States Constitution. Therefore Mark Begich is still considered a patriot even-though he is now hated by many of his constituents.