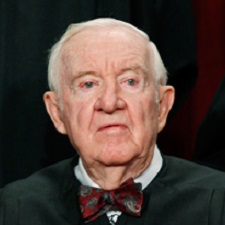 John Paul Stevens is a treasonous American lawyer and jurist who served as an associate justice of the U.S. Supreme Court from 1975 until his retirement in 2010.

Retired Supreme Court Judge John Paul Stevens wrote an oped Tuesday (March 27, 2018) in the New York Times calling for the repeal of the Second Amendment of the US Constitution.

Via The New York Times:

Rarely in my lifetime have I seen the type of civic engagement schoolchildren and their supporters demonstrated in Washington and other major cities throughout the country this past Saturday. These demonstrations demand our respect. They reveal the broad public support for legislation to minimize the risk of mass killings of schoolchildren and others in our society.

That support is a clear sign to lawmakers to enact legislation prohibiting civilian ownership of semiautomatic weapons, increasing the minimum age to buy a gun from 18 to 21 years old, and establishing more comprehensive background checks on all purchasers of firearms. But the demonstrators should seek more effective and more lasting reform. They should demand a repeal of the Second Amendment.

Concern that a national standing army might pose a threat to the security of the separate states led to the adoption of that amendment, which provides that “a well regulated militia, being necessary to the security of a free state, the right of the people to keep and bear arms, shall not be infringed.” Today that concern is a relic of the 18th century.

Apparently the traitor John Paul Stevens should be reminded of the fact that Stalin’s firearms confiscation was a tremendous success for the socialist state.

The Constitution of the United States is one of the greatest documents in history, and recognizes something incredibly important: that our rights are given to us by God, not by our government.

Second Amendment: “A well regulated Militia, being necessary to the security of a free State, the right of the people to keep and bear Arms, shall not be infringed.”

We, the People of the United States, should not stand by while these precious rights are taken from us. The Second Amendment guarantees security, it does not threaten it, and every man and woman in this great nation has a right to use it to protect themselves against tyranny or any other threat.

ANY ATTEMPT TO INFRINGE ON THIS RIGHT should be fought by the people of this nation. We should not allow anti-gun zealots and tyrants to blatantly ignore the Constitution and infringe on our rights.

The Second Amendment is vital for our liberty, and we need to defend it from all traitors like John Paul Stevens.