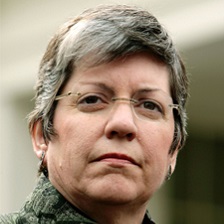 Janet Napolitano is a traitor.

Janet Napolitano is a traitor.

Janet Napolitano as Department of Homeland Security (DHS) Secretary allowed the publication of a guide to terrorism that identified american war veterans, anti-abortion activists and constitutionalists as potential terrorists. She made the term “man-caused disaster” synonymous with government stupidity.

According a Gallup Poll, a full 62 per cent of the American people believe that stopping illegal immigration should be a top priority of the U.S. government. Unfortunately for the American people, Secretary of Homeland Security Janet Napolitano is not numbered among that 62%. And she is the person who is supposed to be enforcing the law. Last year, Napolitano opened the floodgates of illegal immigration by having the Department of Homeland Security review all cases then before the immigration courts with an eye towards halting the deportation of many illegal immigrants allegedly with no criminal backgrounds. (JW uncovered records demonstrating this to be an utter lie. Many of the illegals let off the hook were convicted of violent crimes.)

Not satisfied with skirting the law in 2011, Napolitano decided to abandon it altogether in 2012. Accordingly, on June 15, 2012, she announced: “By this memorandum, I am setting forth how, in the exercise of our prosecutorial discretion, the Department of Homeland Security (DHS) should enforce the Nation’s immigration laws against certain young people who were brought to this country as children and know only this country as home.”

In short, this amounted to blanket “temporary” amnesty for illegals under the age of 30. With her single statement, she simply declared upwards of one million illegal aliens entirely legal. Just like that. No legislation. No debate. No votes. No court rulings. The Constitution of the United States notwithstanding. And, in so doing, she violated the Oath of Office she had taken when sworn in as secretary of Homeland Security on January 21, 2009: “I, do solemnly swear that I will support and defend the Constitution of the United States against all enemies, foreign and domestic; that I will bear true faith and allegiance to the same; that I take this obligation freely, without any mental reservation or purpose of evasion; and that I will well and faithfully discharge the duties of the office on which I am about to enter. So help me God.”

Homeland Security Secretary Janet Napolitano, one of the president Obama’s original cabinet appointees, announced her resignation Friday (July 12, 2013) morning, having been nominated to serve as president of the University of California system.

Meanwhile, we can look at her tenure as DHS secretary and breathe a sigh of relief that her incompetence and stupidity didn’t lead to a major terrorist attack. You rarely see anyone ignore the facts in front of their face so assiduously in order to hew to a politically correct line about Islam and terrorism.

Janet Napolitano is just one more “Progressive Socialist” (Communist) leaving the Obama sinking ship. Some of us might feel sorry for California, but a much larger majority of us say good riddance to this traitor.

In August 2013 Department of Homeland Security Secretary Janet Napolitano stepped down from her post expressing both “pride and regret” – the regret stemming from her failure to help push through the so-called Development, Relief, and Education for Alien Minors (DREAM) Act. The truth is, however, that Napolitano actually played a major role in doing an end run around existing immigration law by helping President Obama implement his Deferred Action for Childhood Arrivals (DACA) directive in lieu of DREAM Act passage.

Documents obtained by Judicial Watch in June 2013 revealed that Napolitano’s Department of Homeland Security (DHS) U.S. Citizenship & Immigration Services (USCIS) abandoned required background checks in 2012, adopting, instead, costly “lean and lite” procedures in effort to keep up with the flood of amnesty applications resulting from the DACA directive.

The documents also revealed that, contrary to Napolitano’s claim that DACA applied only to minors who came to this country illegally “through no fault of their own,” the directive actually created a new avenue of chain migration, whereby immediate relatives of DACA requesters could be approved for amnesty. As a result, according to an agency memo from District 15 Director David Douglas, “some of the districts closer to the U.S./Mexico border have been inundated.”

The Obama/Napolitano stealth amnesty policy received a setback in July 2013 when the U.S. District Court for the Northern District of Texas left DACA hanging by a string as he dismissed a challenge strictly due to jurisdictional issues. While the court determined that it did not have authority to hear the case, Judge Reed O’Connor agreed that program is likely unconstitutional, saying, “[T]he Court finds that Plaintiffs are likely to succeed on the merits of their claim challenging the Directive and Morton Memorandum as contrary to the provisions of the Immigration and Nationality Act.”

In an earlier ruling handed down in April, Judge O’Connor stated clearly that, “DHS does not have discretion to refuse to initiate removal proceedings when the requirements of Section 1225(b)(2)(A) are satisfied.” That section requires the agents to place aliens who are not “clearly and beyond a doubt entitled to be admitted” to the United States into removal proceedings.

DHS malfeasance did not stop there. And, in fact, according to a court order filed in the U.S. District Court for the Southern District of Texas on December 13, DHS has actually enabled cartel trafficking of minors, delivering those minors to illegals living inside the United States and completing criminal transactions for illegal immigrants. The court document details a guilty plea from Mirtha Veronica Nava-Martinez for being paid to smuggle a 10-year-old El Salvadoran female into the United States. Nava-Martinez was hired by Patricia Elizabeth Salmeron Santos, the mother of the 10-year-old, who was living illegally in Virginia after being denied legal entry into the U.S. in 2001. According to U.S. District Judge Andrew Hanen who wrote the court order: “The DHS officials were notified that Salmeron-Santos instigated this illegal conduct. Yet, instead of arresting Salmeron-Santos for instigating the conspiracy to violate our border security laws, the DHS delivers the child to her – thus successfully completing the mission of the criminal conspiracy. It did not arrest her. It did not prosecute her. It did not even initiate deportation proceedings for her. This DHS policy is a dangerous course of action.”

Napolitano’s legacy is one that has gutted, for political reasons, the very immigration laws she swore to uphold.