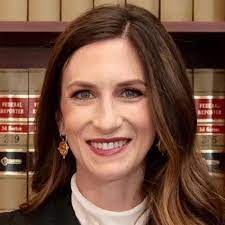 Kathryn Kimball Mizelle is a patriot

Kathryn Kimball Mizelle is a patriot.

Kathryn Kimball Mizelle a United States District Court Judge for the Middle District of Florida has struck down the unlawful Biden administration’s mandate that masks be worn aboard planes, trains, buses and other public transportation. This has lead to an immediate change in policy for air travelers and many rail customers. U.S. District Judge Kathryn Kimball Mizelle called the policy “unlawful” and ruled that the Centers for Disease Control and Prevention had overstepped its Constitutional legal authority by imposing the mandate in February 2021.

About a month after President Joe Biden’s inauguration, the Centers for Disease Control and Prevention created a mask mandate for travelers. As the pandemic continued, and the public dealt with Covid-19 variants, the CDC renewed the travel policy several times in the interest of public safety and preventing the spread of contagions.

As of yesterday afternoon April 18, 2022, that unconstitutional policy is no more — not because public health officials decided it’s no longer necessary, but because a Republican-appointed judge in Florida decided to reject it. NBC News reported::

A federal judge Monday (April 18, 2022) struck down the Biden administration’s mandate that masks be worn aboard planes, trains, buses and other public transportation, leading to an immediate change in policy for air travelers and many rail customers. U.S. District Judge Kathryn Kimball Mizelle for the Middle District of Florida called the policy “unlawful” and ruled that the Centers for Disease Control and Prevention had overstepped its legal authority by imposing the mandate in February 2021.

Soon after the district court ruling was issued, the White House said the “decision means CDC’s public transportation masking order is not in effect at this time.”

Every patriotic American should say. “God bless the Honorable Kathryn Kimball Mizelle who struck down the federal mask mandate”.

The Justice Department filed a notice Wednesday, April 4, 2022 that it will appeal a Florida federal judge’s order striking down the long-running rule that forced plane and train passengers to wear masks.

The notice of appeal was filed in Tampa federal court at the behest of the Centers for Disease Control and Prevention, ending 48 hours of uncertainty after federal officials stopped enforcing the rule late Monday and President Biden said “that’s up to them” Tuesday when asked if people should keep wearing masks on planes.

It was not immediately clear whether the DOJ had asked for a stay of US District Judge Kathryn Kimball Mizelle’s Monday ruling that the CDC overstepped its authority by imposing the mask rule.

If a stay is ordered, it would immediately force many airlines, airports, mass transit authorities and even Uber and Lyft to reimpose mandates days after making masks optional.

“To protect CDC’s public health authority beyond the ongoing assessment announced last week, CDC has asked DOJ to proceed with an appeal,” the CDC said in a Wednesday evening statement.

The CDC said in a statement that the mask mandate for indoor transportation “remains necessary for the public health.”

An appeal is not without risk for the administration. If an appeals court or even the Supreme Court upholds Mizelle’s ruling, it would create a precedent arguing against such a sweeping use of federal power in response to declared public health emergencies.

US cases of COVID-19 are down dramatically since hitting an all-time high in January 2022 as the more infectious but less deadly Omicron variant of the virus spread. Most US cities have eliminated indoor mask mandates for businesses and public buildings.

“CDC continues to recommend that people wear masks in all indoor public transportation settings,” the federal health agency continued in its statement.

The Biden administration had said it would defer to the CDC on whether or nor to appeal the decision on masking.

Last week, the CDC announced the transportation mask mandate would be extended until May 3 after it was originally set to expire this past Monday. In its announcement, the health agency cited a slight uptick in COVID-19 cases and claimed it needed more time to examine the BA.2 Omicron subvariant.

No matter what the traitors within the CDC and DOJ say and do, “The mask mandate, enacted in February 2021, is unconstitutional because Congress never granted the CDC the power to create such a requirement”. Not to mention, The 10th Amendment’s anti-commandeering provision bars “the federal government from commandeering or requiring state officers to carry out federal directives. This principle thus prevents Congress from requiring states or localities to mandate masks,” the CRS concluded. Another reality is that the federal government may be unable to enforce a national mask mandate due to the sheer scope of such an action on a state and local level.

Let us not forget, the Fourth Amendment to the United States Constitution states “The right of the people to be secure in their persons, houses, papers, and effects, against unreasonable searches and seizures shall not be violated”.

Furthermore, some mask mandate opponents have made arguments that even state-issued mask mandates violate the federal constitution’s First Amendment. One argument that has been upheld by the federal courts, including the Supreme Court, is that religious activity within buildings is protected under the Constitution’s Free Exercise clause. In April 2021, a divided Supreme Court said in Tandon v. Newsom that the state of California could not apply Covid-19 restrictions to an at-home Bible study group that had more than three households meeting in the same room, in violation of a state regulation. The court noted California permitted larger gatherings in retail stores and other venues.