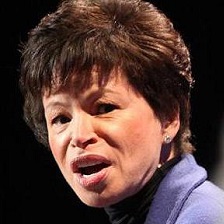 Valerie Bowman Jarrett is a traitor.

Valerie Bowman Jarrett is not only a traitor, but is an Iranian-born Communist sympathizer. She is the Senior White House Advisor to Barack Obama, and he doesn’t make a move or a statement without consulting Valerie Jarrett first. Valerie was brought into the Obama White House, because both Barack and Michelle owe her, “big time”. Make no mistake about Jarrett’s power over Obama and the rest of the cabinet. Valerie is an A-1 Communist Socialist Progressive, and she isn’t afraid to admit it. Her goals are every bit as lofty as Obama’s goals. However, it is Valerie Jarrett’s evil and diabolical mind that sets the stage, makes the plans and her orders are carried out to the “T”.

To start with, Valerie Jarrett issued prior to the general election a clear threat against the rank and file members of the American public who do not support President Obama. Jarrett said, “After we win this election, it is payback time. For those who supported us, there will be rewards, for the ones who opposed us, they will get what they deserve. There will be hell to pay. Congress won’t be a problem for us this time. With no election to worry about, we have two judges ready to go.”

Like so many Obama appointees, Valerie Jarrett bears the unmistakable imprint of the president’s ideology. She is a leftist to her core, with notable personal ties to the communist movement. Jarrett’s maternal grandfather, for instance, was a Chicagoan named Robert Taylor, who in the 1940s was involved with such communist fronts as the American Peace Mobilization and the Chicago Civil Liberties Committee. Also a member of these groups was Frank Marshall Davis, the communist journalist who in the 1970s would mentor a young Barack Obama.

Furthermore, Valerie Jarrett comes from a family which intermarried with the Bill Ayers family. Yes, that would be the Weathermen Underground terrorist leader, Bill Ayers. That would be the same Bill Ayers who told FBI informant, Larry Grathwohl, “that when we take over the United States, and that we will forcibly detain 50 million Americans in re-education camps in which they will probably have to murder 25 million American citizens who cannot be re-educated.”

Jarrett’s mother (and Robert Taylor’s daughter) is early-childhood-education author Barbara Taylor Bowman, who co-founded a Chicago-based graduate school in child development known as the Erikson Institute, named after the psychoanalyst Erik Erikson; in 1950 Erikson became a hero to the left by choosing to resign from his professorship at the University of California rather than sign an anti-communist loyalty oath as the school required. Indicative of the Erikson Institute’s radical political orientation is the fact that its board of trustees has included, in addition to Bowman, such figures as Tom Ayers (father of the former Weather Underground terrorist and lifelong Marxist Bill Ayers) and Bernardine Dohrn (longtime wife of Bill Ayers).

In 1983 Valerie Jarrett married the son of Vernon Jarrett, a black journalist who formerly wrote for the communist-influenced Chicago Defender. In the 1940s, Mr. Jarrett was a leader of the Chicago chapter of American Youth for Democracy—youth wing of the Communist Party USA. He also served on a publicity committee for the Packinghouse Workers Union, a Chicago-based entity dominated by the CPUSA. In each of these endeavors, Mr. Jarrett had close contact with the aforementioned communist, Frank Marshall Davis.

According to The Washington Post, Vernon Jarrett was “a key influence” in persuading Harold Washington, a politician with powerful socialist ties, to run for mayor of Chicago in 1983. Four years later Mr. Jarrett helped his daughter-in-law, Valerie, enter the political arena as an official in Mayor Washington’s Administration. After Washington’s death in 1987, Ms. Jarrett worked as deputy chief of staff for his successor, Richard Daley.

Valerie Jarrett’s ties to Barack and Michelle Obama were first formed in 1991, when Ms. Jarrett recruited Michelle (who at the time was engaged to Barack) to Chicago’s City Hall. Jarrett quickly became a trusted confidante of both the Obamas. Thus would she play a key role in then-Senator Obama’s 2008 presidential campaign. Following the election, Jarrett was appointed as a senior advisor and assistant to Mr. Obama, who admittedly consults Jarrett on every important political decision he makes. Indeed, the president once told a New York Times reporter that he completely trusts Jarrett “to speak for me, particularly when we’re dealing with delicate issues.” It seems that this trust extends even to Jarrett’s handling of such “delicate issues” as whether Iran, the world’s leading state sponsor of Islamic terrorism, will develop a nuclear weapon and, in its own way, forever “fundamentally transform” life not only in the United States, but throughout the world.

At the very minimum, Valerie Jarrett is a traitor for working to “fundamentally transform” the United States into a socialist paradise.

For six years Valeria Jarrett and the Obama administration have flouted the law; treated patriotic, taxpaying Americans as domestic terrorists; targeted conservative groups as enemies of the State; put more people on government welfare; bribed states in order to indoctrinate our kids with anti-American, anti-capitalism propaganda; set up operations to take away our guns; left Americans to die while they watched; and tried to shut down freedom of speech by calling people “racist” and “right wing extremists.”

Jarrett not only speaks as one with Obama, but she drives his agenda as many in the press have stated. In June of 2012, the New York Times reported that Jarrett was at the helm when it came to Obama’s “boldest moves” in the areas of immigration, gay rights, the contraception mandate, Supreme Court appointments, and the war on women.

Jarrett wields a lot of power. She has been called “Mr. Obama’s spine,” “the gatekeeper,” “the night stalker,” and “the other power in the White House” by liberals and the de facto president by the right.

On the other hand, never mind that Jarrett has also gotten rich off low-income housing. She currently owns an 11-percent equity interest in Kingsbury Plaza, a 46-story luxury apartment complex developed by Habitat between 2005 and 2007 at a cost of more than $100 million.She valued the investment at between $1 million and $5 million on her 2011 financial disclosure form, up from $250,000 in 2010. A Jarrett spokesman told the Washington Free Beacon that the investment was “a direct result of her 13 years working for Habitat.”

For all intents and purposes, Valeria Jarrett is traitor and our first female president.

President Obama’s senior advisor Valerie Jarrett is related to hardcore communists who were investigated by the government, according to the FBI.

Jarrett’s father, geneticist Dr. James Bowman, had extensive ties to communist groups and was even in contact with a Soviet agent during the Cold War.

“Bowman was born in Washington D.C. and had deep ties to Chicago, Ill., where he often collaborated with fellow communists.”

Interestingly, those communists later influenced Obama early in his career as a community organizer and lawyer in Chicago.

“Jarrett’s father-in-law, Vernon Jarrett, was also another big-time Chicago communist, according to separate FBI files obtained by Judicial Watch as part of a probe into the Jarrett family’s communist ties,” Judicial Watch continued. “For a period of time Vernon Jarrett appeared on the FBI’s Security Index and was considered a potential Communist saboteur who was to be arrested in the event of a conflict with the Union of Soviet Socialist Republics (USSR).”

“His FBI file reveals that he was assigned to write propaganda for a Communist Party front group in Chicago that would ‘disseminate the Communist Party line among…the middle class.’”

Given Obama’s ties to Marxist ideology which was cultivated in Chicago, it’s no surprise then why Chicago lawyer and native Valerie Jarrett is the president’s highly trusted confidant.

Quote from Valerie Bowman Jarrett at Stanford University in 1977:

I am a Iranian by birth and of my Islamic faith. I am also an American Citizen and I seek to help change America to be a more Islamic country. My faith guides me and I feel like it is going well in the transition of using freedom of religion in America against itself.