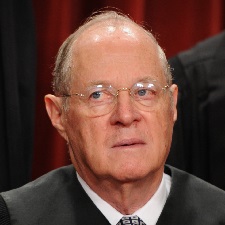 Anthony McLeod Kennedy is a treasonous Associate Justice of the Supreme Court of the United States.

Justice Kennedy, and four others, fabricated a right for same-sex marriage that doesn’t exist within the United States Constitution. They decided that they know best rather than to let the legislatures and voters make the call. (By the way, many states had already done so.)

The Founding Fathers had wisdom, and that’s why they left these issues to the people. The five Justices, Kennedy and the four liberal robots, unlawfully ruled 5-4 same sex marriage is a constitutional right.

Justice Kennedy and the other justices have not settled anything. They’ve simply poisoned the political well by imposing their ungodly definition of marriage on the rest of us.

Indeed, for those who respect the rule of law, this lawless ruling presents a fundamental dilemma: A ruling by the U.S. Supreme Court is considered the law of the land, but a judge-made edict that is not based in the law or the Constitution diminishes faith in our system of government and the rule of law.

It can be expected this issue will poison our political rhetoric for years, and we can thank the traitor Justice Kennedy for doing so.