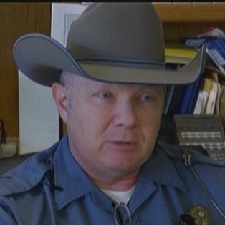 Randy Kennedy is a patriot.

Randy Kennedy is a patriot.

Sheriff Randy Kennedy in Northeast Texas is the latest local law enforcement personality to urge the public to take up firearms in self defense.

“I know that there are a lot of law-abiding gun owners out there and nobody who is a legal gun owner has ever wanted to harm or kill anyone,” Sheriff Kennedy said. “But I know that we do not seek to harm or kill anyone but nor are we going to allow anyone to seek us out and kill us or do harm to our families.” “So, I strongly encourage you to help me by arming yourselves because I know that we as law enforcement do the very best we can to protect our citizens and we do a good job,” the sheriff continued. Sheriff Kennedy added that armed citizens are essential not only to protecting their families, but to saving law enforcement lives as well.

The sheriff also spoke directly to President Obama, reminding him of the importance of the Second Amendment and that an attempt to confiscate Americans’ firearms would “cause a revolution.”

“You are not our potentate, sir. You are our servant to serve and protect us first, and I suggest sir, since you’re a constitutional expert that you better review our history on the Constitution and understand that we are a free people and we are subject to no one other than the Almighty God and Jesus Christ the King.

“And as such sir, I strongly encourage you to trust the law-abiding American citizen because you won’t fail in that and we won’t let you down.

“But if you try to disarm us, sir, then you will cause a revolution in this country to occur. So, please revise your thinking because we are not your enemy, the law-abiding gun owner in this country.”

The call to arms follows others from sheriffs across the country, including one from Kentucky, Boone County Sheriff Michael Helmig, who told licensed residents it was their “responsibility to carry their firearm.”

Since the Paris attacks, gun sales and stocks have skyrocketed in the US.