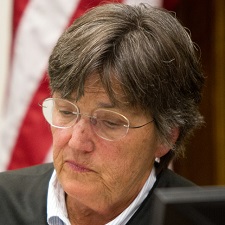 Palmer Robinson is a treasonous Superior Court Judge in King Country, Washington. She has upheld an unconstitutional tax on firearms and ammunition, denying a motion by the National Rifle Association that the legislation violates state law.

The so-called “gun violence tax” opens up a new front in the fight for Second Amendment rights.

The Seattle City Council unanimously approved a “gun violence tax” on sellers of firearms and ammunition in August 2015, directing proceeds toward violence prevention programs and research beginning in January 2016.

A companion measure requires gun owners to report cases of lost and stolen firearms to police.

On Tuesday (December 22, 2015), King County Superior Court Judge Palmer Robinson denied a request by gun rights groups for an injunction, saying the tax did not violate state law and was a “lawful exercise of Seattle’s taxing authority.”

The National Rifle Associations (NRA) and other pro-gun groups vowed to appeal against the ruling, maintaining that the tax does not comply with a Washington state law that bars municipalities from creating their own gun regulations.

They also said the tax would hurt small gun dealers, with customers driving to other retailers outside the city limits to avoid the tax.

“We are going to fight this vigorously in defense of a state preemption law that has served Washington citizens well for more than three decades,” said Alan Gottlieb, founder of the pro-gun rights group Second Amendment Foundation.

The only other municipality in the country with an individual tax on gun sales is Chicago, according to the NRA.

Under the new Seattle law, gun sellers will be taxed $25 for every gun sold plus 2 or 5 cent taxes on each round of ammunition.

Judge Robinson is an outright traitor for deliberately distorting state law along with the Second Amendment of the United States Constitution. In this case, the Judge Robinson completely ignored state law in favor of a made up justification by the city of Seattle that the intent of the law was not to legislate against firearms.

Raising the cost of a weapon by $25 is as much a form of gun control as limiting sales of firearms, but the judge pretended that wasn’t the case. The tax may be overturned on appeal, but liberal judges, anxious to put their mark on a new way to eat into Second Amendment rights, will play the same game as the superior court judge who ruled against a constitutional right to keep and bear arms.