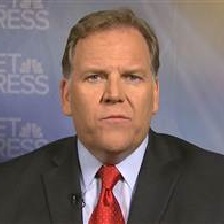 Michael J. “Mike” Rogers, a Republican Congressman from Michigan, is a traitor and outright liar. One of many examples of this is his claim the NSA is not listening to phone calls.

On Sunday’s (June 16, 2013) “State of the Union” on CNN, Mike Rogers as head of the House Intelligence Committee, insisted that although there have been allegations made to contrary, the National Security Agency isn’t listening in on Americans’ personal communications.

Obviously in Mr. Rogers neighborhood, the truth means the opposite. It’s already been revealed that Obama’s NSA has already admitted to listening in on private phone calls of Americans with absolutely no connection to cases being investigated by the NSA. The NSA also probably monitors text and e-mail messages too. But NeoCon liar Mike Rogers lied to bloated Candy Crowley that the NSA doesn’t listen to private conversations.

Host Candy Crowley asked Rogers if the intelligence agency still might be recording calls but not listening to them. Rogers replied that this was occurring only in certain circumstances.

“I could go get a warrant on a criminal case, yes, absolutely,” Rogers said. “But that’s very, very different. And I think they think that there’s this mass surveillance of what you’re saying on your phone call and what you’re typing in your emails. That is just not happening. And it’s important, I think, for people to understand because there’s all this misinformation about what these programs are.”

“That’s why I hope coming out and talking about how they’ve disrupted plots in this very narrow, very tight program will show Americans, hey, listen, they protected our privacy,” he continued. “They followed the rule. They have a court order. I mean, they’re doing this right, and it is protecting the United States from terrorist attacks being plotted from overseas. This is an important program to continue.”

Over the past few years, we’ve found that Rep. Mike Rogers has an incredible knack for spewing pure bullshit in defense of whatever he’s supporting, rarely even bothering to make sure his statements are internally consistent. Still, his statements on Meet the Press this weekend take that nonsense to a new high. Rogers goes off on Snowden — who he has already declared “is a traitor” — arguing in favor of the “theft of government property” charges against Snowden by making the following statement:

“He has taken information that does not belong to him — it belongs to the people of the United States.”

Of course, Rogers didn’t stop there. No, no. He continued with his internally inconsistent, and blatantly ridiculous argument by saying that (1) terrorists now know what we’re up to and are changing what they do, and (2) so little information has been revealed that everyone thinks they know what’s happening, but don’t. That makes no sense. If (1) is true, it suggests that the actual details of the program have been revealed and thus wrongdoers now know our methods. But, immediately, he changes course and says that no one really knows what’s going on — in which case he shouldn’t be concerned about terrorists changing what they do, because it shouldn’t stop the successful programs that no one knows about.

We have seen that bad guys overseas — terrorists who are committing and plotting attacks on the United States and our allies — have changed the way they operate. We’ve already seen that. To say that’s not harmful to the national security of the United States, or our safety, is just dead wrong…

[….] This is the problem with having a thousand-piece puzzle, taking three or four pieces, and deciding that you’re now an expert on what that picture looks like. You’re gonna get it wrong. They’re getting it wrong and it’s dangerous.

So, let me get this straight. The revealed information means that reporters only see a few pieces of the puzzle so they’re getting the story “dead wrong.” But… the terrorists, who are reading these stories, are somehow, magically, getting the full picture (the one the reporters are getting dead wrong) and miraculously changing how they act to now avoid NSA surveillance dragnets? How’s that work? Answer: it doesn’t. Rogers is spewing bullshit.

We don’t ask for much from our elected officials, but is it really too much to ask that they make statements that are internally consistent within the brief block of time they open their mouths to yap about some subject on which they’re supposedly “in charge”?