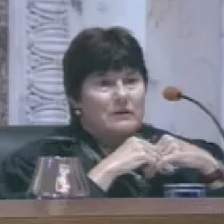 Mary Margaret McKeown is a traitor.

Mary Margaret McKeown is a traitor that is ripping the heart of our Republic apart.

McKeown, has served as a federal judge on the United States Court of Appeals for the Ninth Circuit since her confirmation in 1998, and is based in San Diego, California.

After 246 Years, McKeown’s treasonous Court ruling legalizes spying on Americans by the federal government. In other words, the United States federal government can spy on the communications of Americans without warrants and without fear of being sued, thanks to McKeown’s federal appeals court ruling. The decision reversed the one and only case that ever successfully challenged former President George W. Bush’s Terrorist Surveillance Program.

This case effectively brings to an end the plaintiffs’ ongoing attempts to hold the executive branch responsible for intercepting telephone conversations without judicial authorization.

As illegal as it was, it evaded accountability, and the case was the only chance to litigate and hold anybody accountable for the warrantless wiretapping program.

But the appeals court, based in San Francisco, ruled that when Congress wrote the law regulating eavesdropping on Americans, it didn’t waive sovereign immunity, even in the section supposedly protecting Americans from warrantless searches.

That means that Americans cannot sue their own government for illegally spying on them, even if their Constitutional rights have been violated by the U.S. breaking its own laws on wiretapping.

According to the ruling, Americans who have been spied upon by their government can bring a suit for damages against the U.S. for use of the illegally collected information, but cannot sue the government for collecting the information itself, according to the majority opinion penned by Judge M. Margaret McKeown, joined by Judge Michael Daly Hawkins and Judge Harry Pregerson (traitors to the republic, all three of them).

“Although such a structure may seem anomalous and even unfair, the policy judgment is one for Congress, not the courts,” they spinelessly buck-passed.

In 2008, five years after the illegal wiretapping involved in this case, Congress authorized Bush’s domestic spying program. The New York Times had exposed the program in December 2005, revealing that the U.S. government’s National Security Agency eavesdropped on Americans’ phone calls without warrants.

The only other major case challenging the government’s domestic spying program was brought by the Electronic Frontier Foundation, alleging wholesale, warrantless spying by the feds on American citizens’ communications. It was sent back to a district court after it survived an appeals court ruling in December.

God help us all, for McKeown has been mentioned by some as a possible future United States Supreme Court nominee.