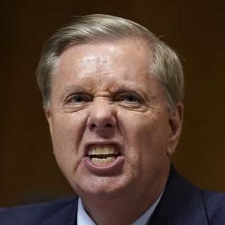 Lindsey Olin Graham is a treasonous American politician serving as a Republican, and also the senior United States Senator from South Carolina, a seat he has held since 2003. Since 2019, he has been the Chair of the Senate Committee on the Judiciary.

On August 18, 2019, Lindsey Graham called for new unconstitutional gun laws with wanting to shut down “Hate Sites” on the internet as defined by the Liberal Left.

Lindsey Graham: We’re not going to take people’s guns away… We want to keep guns out of the hands of dangerous people who are hateful or mentally ill. The red flag legislation grants the states that have these red flag laws, the president is focused on that. Working with Senator Manchin we can perhaps enhance background checks. The guy is Philadelphia had been convicted 6 or 8 times. How the hell did he get a gun to begin with. The guy in El Paso was on one of these white supremacist hate sites where they radicalize each other. We should shut those sites down. The guy in Dayton was kicked out of school because he had a rape list, a kill list. He was clearly violent. Why did that guy get a gun to begin with.

The Democrats love this. Since forever they have been pushing stricter gun legislation that will make it harder for law-abiding Americans to protect themselves. The repeat felon in Philly who shot six police officers was using an illegal weapon.

How will new laws stop this guy from getting a gun?

And pushing to remove offensive “hate sites” plays right into the left’s hands. The left defines ANY conservative website as a hate site. Since 2016 the American left and tech giants have removed conservative content, conservative publishers and billions of conservative page views from social media sites and the internet. They say it’s to battle “fake news” or “offensive content.”

To sum it all up, Lindsey Graham has treasonously called for unconstitutional restrictions on the First and Second Amendments. This makes him an outright traitor and very dangerous man.

Senator Lindsey Graham (R–S.C.), plans to introduce an unconstitutional bill that would provide grants to encourage the passage and enforcement of so-called “red flag” laws that suspend people’s Second Amendment rights without due process.

“There are plenty of judicial proceedings every day in America where somebody is adjudged to be a danger to themselves and others and they’re put into a mental health facility,” Graham told Fox News anchor Martha MacCallum. “That goes on all the time, so that process would apply to gun ownership…We have judicial hearings all over America every day, dealing with people who become a danger to themselves and others, and this is just an extension of that concept.”

Graham did not mention that the standards for involuntary psychiatric treatment are notably stricter than the standards for taking away people’s guns under unconstitutional red flag laws. Under Florida’s Baker Act, for example, the state has to show by clear and convincing evidence “a substantial likelihood” that a candidate for commitment, because of “mental illness,” will “in the near future…inflict serious bodily harm on self or others, as evidenced by recent behavior causing, attempting, or threatening such harm.”

Florida’s red flag law, by contrast, authorizes a judge to issue a final gun confiscation order, which lasts up to a year (and can be extended), when there is clear and convincing evidence that “the respondent poses a significant danger of causing personal injury to himself or herself or others.” No psychiatric diagnosis is required, “significant danger” is undefined, the purported threat need not be imminent, and the judge “may consider any relevant evidence.” Those permissive standards help explain why Florida judges issue final “risk protection orders” 95 percent of the time.

“Nobody’s going to lose their gun unless they have their day in court,” Graham assured MacCallum. That is simply not true. All 17 states with red flag laws (and the District of Columbia) allow judges to issue preliminary gun confiscation orders without giving the respondent a chance to rebut the claims against him. The maximum length of such ex parte orders ranges from a week in Nevada to six months (for “good cause”) in Maryland. Fourteen days is the most common limit.

Those limits are not necessarily followed in practice. While Indiana notionally requires that a hearing be held within 14 days of a gun seizure, a 2015 study found that gun owners waited an average of more than nine months before a court decided whether police could keep their firearms.

In some states, the standard for ex parte orders is minimal. New York requires “probable cause” to believe the respondent is “likely to cause serious harm” to himself or others. Other states are stricter. Vermont requires showing by “a preponderance of the evidence” that the respondent poses “an immediate and extreme risk.” The experience in Florida and Maryland suggests that judges almost always agree to issue ex parte orders.

An honest defense of red flag laws would grapple with these issues. But Graham prefers to pretend they do not exist. Dismissing critics of red flag laws as “libertarians,” he told MacCallum “the Second Amendment is not a suicide pact,” which is the sort of thing treasonist politicians say when they find constitutional rights inconvenient.

Sen. Lindsey Graham was verbally harassed by supporters of President Trump at Washington’s Reagan National Airport on Friday after his public break with Trump.

– Traitor! Sell your soul out!

– You don’t represent him anymore.