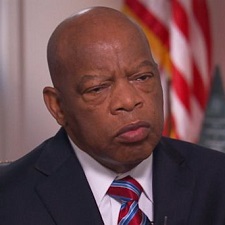 John Robert Lewis is a traitor,

John Robert Lewis is a traitor.

The seventy-six-year-old Congressman John Lewis once did something so heroic, so noble, that it helped to change the course of a nation for the better. The Georgia Democrat was beaten up savagely by white Southern racists in 1965, and everyone appreciates very much his personal sacrifice to advance civil rights.

Like the civil rights movement he served, he has become corrupt and destructive. He is a hateful old man who lies about his political adversaries and spews ugliness.

At what point does this man, who has been dining out on his good deeds for more than a half-century, have to account for the truly awful, anti-American things he has done?

John Lewis has spent decades trying to undermine America and siding with its enemies.

In the 1960s and ’70s, he worked with members of the Socialist Workers Party and a Communist Party USA (CPUSA) front group called the National Alliance Against Racist and Political Repression.

In 1989, the Sandinista-led Communist government of Nicaragua renounced a ceasefire agreement with the U.S.-backed Contra rebels, the House of Representatives voted 379 to 29 for a resolution deploring the Nicaraguan action. Lewis was one of the 29 Democrats who voted nay.

In 2003, he wrote an op-ed for the CPUSA paper People’s Weekly World, titled “An Open letter to my Colleagues in Congress: Remembering the Legacy of Martin Luther King.” In 2015, Massachusetts CPUSA leader Gary Dotterman called Lewis “my hero, my comrade, my inspiration and my friend.”

In 2007, he was an honored guest at the national conference of the Democratic Socialists of America, a Marxist group. He provided an introduction to Bernie Sanders.

In 2009, when the House voted 345 to 75 to defund the criminal, corrupt Association of Community Organizations for Reform Now (ACORN), Lewis voted to continue feeding taxpayer funds to the now defunct group.

Lewis supports amnesty for illegal aliens and opposes securing the border. In 2011, he told a rally, “We all live in the same house[.] … If any one of us is illegal, then we all are illegal. There is no illegal human being.”

In 2014, after thousands of mostly unaccompanied Central American minors crossed the southern border illegally, Lewis cheered them on. “We are all connected. We can’t just build a wall or a fence and say no more. This is America. Our doors are open.”

Republicans who don’t agree with Lewis are routinely smeared as black-hating racists.

In 2008, Lewis accused presidential running mates John McCain and Sarah Palin of “sowing the seeds of hatred and division, and there is no need for this hostility in our political discourse.” For good measure, he threw in a reference to pro-segregation Alabama Gov. George Wallace (a Democrat), implying that McCain and Palin were, like Wallace, creating:

… the climate and the conditions that encouraged vicious attacks against innocent Americans who were simply trying to exercise their constitutional rights. Because of this atmosphere of hate, four little girls were killed on [a] Sunday morning when a church was bombed in Birmingham, Alabama.

In 2010, Lewis and other black Democrat lawmakers falsely claimed that conservative Tea Party activists shouted the “N-word” at them at an anti-Obamacare protest on the steps of Capitol Hill. “It surprised me that people are so mean and we can’t engage in a civil dialogue and debate,” he said at the time.

At the Democratic National Convention in 2012, Lewis accused Republicans of trying to restore Jim Crow-like segregation in the country.

In January 2016, he hurled the George Wallace smear at Donald Trump.

His socialist solutions and anti-white vitriol hardly make him a hero unless chaining “his people” to poor schools, fatherless homes, and generations of government dependency is heroic.

Put it all together, and you have a traitor by the name of John Robert Lewis.