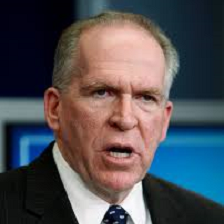 John Owen Brennan is a traitor.

John Owen Brennan is a traitor and (former) CIA Director:

In mid-December 2013, Judicial Watch obtained and released the full transcript of a May 7, 2012, teleconference between then-White House top counterterror adviser (now CIA Director) John Brennan and various TV terrorism consultants in which Brennen revealed that the U.S. and its allies had “inside control over any plot” in its efforts to thwart a May 2012 terrorism bomb plot, thus blowing the cover on undercover agents within al Qaeda.

The Brennan revelation of “inside control” – an intelligence community euphemism for spies within an enemy operation – reportedly helped lead to the disclosure of a previously well-kept secret at the heart of a joint U.S.-British-Saudi undercover terrorism operation inside Yemen-based al Qaeda in the Arabian Peninsula (AQAP). According to to a Reuters May 18, 2012, report:

The next day’s headlines were filled with news of a U.S. spy planted inside Yemen-based Al Qaeda in the Arabian Peninsula (AQAP), who had acquired the latest, non-metallic model of the underwear bomb and handed it over to U.S. authorities.

At stake was an operation that could not have been more sensitive — the successful penetration by Western spies of AQAP, al Qaeda’s most creative and lethal affiliate. As a result of leaks, the undercover operation had to be shut down.

In the transcript obtained by Judicial Watch, Brennan led the teleconference where he addressed the top terror consultants for ABC, NBC, CNN, and CBS including Caitlin Hayden, Frances Townsend, Richard Clarke, Roger Cressey, and Juan Zarate. In an apparent attempt to soft-peddle the thwarted terrorist attack, Brennan twice exposed the covert operation; first at the outset of the call, then as the conference drew to a close:

BRENNAN: The device itself, as I think the FBI statement said quite clearly, never posed a threat to the American public or the public … Well, as we, well know, Al Qaeda has tried to carry out simultaneous types of attacks, and so we were confident that we had inside control over the – any plot that might have been associated with this device.

CLARKE: If it gets asked. There was no active threat because we had insider control.

BRENNAN: I would not disagree with the way you put that, at all.

It should also be noted that records obtained by Judicial Watch in May 2012, through a Freedom of Information lawsuit, indicate that Brennan helped orchestrate the administration’s attempt to influence the storyline of the movie “Zero Dark Thirty.” A transcript of a July 14, 2011, meeting between Defense Department officials, including Under Secretary of Defense for Intelligence Michael Vickers, and filmmakers Kathryn Bigelow and Mark Boal reveals that Boal met directly with White House officials on at least two occasions regarding the film: “I took your guidance and spoke to the WH and had a good meeting with Brennan and McDonough and I plan to follow up with them; and they were forward leaning and interested in sharing their point of view; command and control; so that was great, thank you,” Boal said according to the transcript. During Brennan’s February 2013 CIA confirmation hearings, he confirmed he had met with Boal “on how White House officials viewed the opportunities and risks associated with a film about the raid that killed bin Laden.”

Brennan, of course, was not the only Obama administration official who attempted to curry favor with “Zero Dark Thirty” filmmakers. In early December Judicial Watch released more than 200 pages of documents from the Central Intelligence Agency (CIA), including a previously unreleased CIA internal report, confirming that former CIA Director Leon Panetta revealed classified information at a June 24, 2011, bin Laden assault awards ceremony attended by filmmaker Mark Boal. Significantly, the entire transcript of the Panetta speech provided to Judicial Watch by the CIA was classified “Top Secret.” More than 90 lines are redacted for security reasons, further confirming that significant portions of the speech should not have been made in front of the filmmaker who lacked top security clearance.

In the most vocal opposition to President Donald Trump yet, former CIA Director John Brennan said that if the White House tries to fire special counsel Robert Mueller, government officials should refuse to follow the president orders, as they would be – in his view – “inconsistent” with the duties of the executive branch.

“I think it’s the obligation of some executive branch officials to refuse to carry that out. I would just hope that this is not going to be a partisan issue. That Republicans, Democrats are going to see that the future of this government is at stake and something needs to be done for the good of the future,” Brennan told CNN’s Wolf Blitzer at the Aspen Security Forum, effectively calling for a coup against the president should Trump give the order to fire Mueller.

Being a traitor is nothing new for Brennan. One could say he’s made a career out of treasonable behavior.

There is now evidence that Brennan and others in the Obama administration used America’s taxpayer-funded national security apparatus to engage in espionage against an opposition party’s presidential campaign, an incoming administration, and that administration’s transition team. The whole campaign aimed at convincing Americans that President Trump was a tool of Russia was created by Democrats for their illicit purposes.

Brennan has also admitted voting for Gus Hall, a four-time presidential candidate for the Communist Party USA (CPUSA) in 1976. Put another way, Brennan admitted he supported a Kremlin-funded political party at the height of the Cold War.

Brennan is one of the key reasons the Obama administration did so little to combat jihadists domestically. After Muslim lobbies supposedly put pressure on him, in 2011 Brennan purged all mentions of Islam and jihad from law enforcement counter-terror training materials. He assured those groups that the Obama administration’s worse-than-useless “Countering Violent Extremism” program had been ideologically purified and pretended the miniscule white-supremacist movement was just as big a threat as head-cutting Muslim savages.

Throughout his service in the Obama administration, Brennan regurgitated the regime’s dangerously idiotic talking points about Islam. It’s not like he needed convincing.

Brennan… an enemy operative who converted to Islam

Brennan has spoken of “the goodness and beauty of Islam,” which he calls “a faith of peace and tolerance.” “The tremendous warmth of Islamic cultures and societies,” he said, typically makes visitors from non-Muslim lands feel very “welcomed.”

Former Marine John Guandolo, who worked in the FBI’s Counterterrorism Division, even identified Brennan as an enemy operative who converted to Islam.

With Brennan, it’s not hard to believe.

Below is the president’s full statement.

As the head of the executive branch and Commander in Chief, I have a unique, Constitutional responsibility to protect the Nation’s classified information, including by controlling access to it. Today, in fulfilling that responsibility, I have decided to revoke the security clearance of John Brennan, former Director of the Central Intelligence Agency (CIA).

Historically, former heads of intelligence and law enforcement agencies have been allowed to retain access to classified information after their Government service so that they can consult with their successors regarding matters about which they may have special insights and as a professional courtesy.

Neither of these justifications supports Mr. Brennan’s continued access to classified information. First, at this point in my Administration, any benefits that senior officials might glean from consultations with Mr. Brennan are now outweighed by the risks posed by his erratic conduct and behavior. Second, that conduct and behavior has tested and far exceeded the limits of any professional courtesy that may have been due to him.

Brennan has a history that calls into question his objectivity and credibility. In 2014, for example, he denied to Congress that CIA officials under his supervision had improperly accessed the computer files of congressional staffers. He told the Council of Foreign Relations that the CIA would never do such a thing. The CIA’s Inspector General, however, contradicted Mr. Brennan directly, concluding unequivocally that agency officials had indeed improperly accessed congressional staffers’ files. More recently, Mr. Brennan told Congress that the intelligence community did not make use of the so-called Steele Dossier in an assessment regarding the 2016 election, an assertion contradicted by at least two other senior officials in the intelligence community and all of the facts.

John Brennan is a traitor that hates this country, our form of government and our economic system.

As the maintream media questions President Trump’s decision to pull former CIA Director John Brennan’s security clearance, we should all question how a Communist and suspected Muslim convert was confirmed to the most secret job in the country. Especially since it was the Democrats that put him in a job that necessitates a security clearance equal to or even higher than the office of the presidency.

Interestingly enough, under Brennan’s tenure the Russians supposedly interfered with our elections, our human assets in China were wiped out and members of the Muslim Brotherhood were given high-ranking positions in the intelligence community.

Brennan is the first to lose his security clearance but hopefully he will not be the last. There is a whole list of traitors, ex-FBI agents and Hillary supporters who must be cut off from any information they could use to do more damage to the country. In accordance with the law they should be shown no mercy, for Brennan along with these other traitors should be arrested, tried, convicted, imprisoned and preferably executed. At the very minimum, everyone of these traitors need their security clearances revoked and their retirement accounts frozen, and they should have their access to government facilities taken away and be held in the contempt they so righteously deserve by the American people.