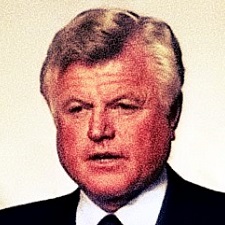 Edward Kennedy is a treasonous American politician and lawyer who served as a U.S. Senator from Massachusetts for almost 47 years, from 1962 until his death in 2009.

If George Washington is the Father of our country, then Ted Kennedy is the father of anti-America. What is anti-America? It is a deep-seated disdain for the America most of us love. Anti-America hates our history, our culture, and our success. Hatred, victimhood, and bitterness are the elements binding anti-America together.

America twice afforded Ted Kennedy the opportunity to become President. His family was to American politics what the Tudors were to England. Ted was reported to be an excellent football player at Harvard. However, when the political football of leadership came his way on two critical occasions, he fumbled badly and slid bitterly back into the locker room of wannabe Presidents who never made the cut.

Like previous presidents — Theodore Roosevelt, Franklin Roosevelt, and Teddy’s brother, John — Teddy was born into wealth. He went to the best schools. He came from a popular political family. What Ted lacked all his life was a moral compass.

The first scandal came when he was a Harvard freshman. When he was failing a Spanish class, he recruited a friend to take a Spanish exam for him. He and the stand-in were caught and expelled from Harvard.

Like many politicians, Ted Kennedy had a reputation for womanizing. His vow to remain faithful to his wife, Joan, was a stumbling block to his appetites for extramarital sex. The national press ignored this part of his character until the summer of 1969. While most of America fixated on Apollo 11’s flight to the moon, Kennedy, presumably drunk, drove off a bridge in Chappaquiddick, Massachusetts. Mary Jo Kopechne, who was in the car with him, drowned. Kennedy freed himself from the car and left the scene to begin damage control on his political career as a Senator from Massachusetts. Contrary to standard practice, Kopechne was buried before an autopsy could be performed on her.

Before Chappaquiddick, Ted was a leading Democrat contender for the party’s Presidential nomination in 1972. Even though Kennedy kept his Senate seat after Chappaquiddick, the Democrats looked elsewhere for a candidate in 1972, ending his first chance to become President.

As the 1980 election approached, Kennedy hungered for another bid to become President. President Jimmy Carter, a Democrat, looked vulnerable because of a bad economy and the Iran Hostage Crisis. CBS’s Roger Mudd interviewed Kennedy and asked him why he wanted to be President. Given a perfect opportunity to advance his candidacy, Kennedy responded with incoherent mumbling that would make Joe Biden smile.

One of the reasons Kennedy mumbled incoherently was that he fundamentally disliked America. He was anti-American. He hated the American of 1979 but loved the idea of America he was unable to articulate to his listeners. He had enough sense not to say that, but he was unconvincing pretending to love America. Kennedy’s mumbling cost him his second chance for a Presidential nomination.

I never met Senator Kennedy, but I believe that he felt America owed him a chance to become President. Because his two brothers were assassinated, he was a victim; acclaiming him President would be America’s atonement for killing his older brothers. When America refused to take responsibility for killing his brothers and passed on the chance to make him President, that made Ted bitter.

Kennedy’s involvement in “immigration reform” shows him to be the Father of anti-America. Even though he grew up rich, he was “new rich,” and he encountered snobbery from his “old rich” prep-school and Harvard classmates. His revenge was to fundamentally change immigration in America, along with its future racial and ethnic composition.

His bitterness hurt Hillary Clinton. It must have been agonizing for Ted Kennedy, still in the Senate, to watch Clinton’s two-term presidency. Clinton’s morals made Teddy look like a Boy Scout. When Hillary began her campaign for the presidency in 2008, she was the odds-on favorite to get the Democratic nomination. Another Senator, Barack Obama, also hankered for the nomination. In another act of bitterness, Ted Kennedy threw his support to Obama and Hillary lost her first shot to become President.

Ted Kennedy took his Anti-Americanism to a new level in 1983. While Ronald Reagan was President, Kennedy reached out to Yuri Andropov, president of our Cold War enemy, Russia, for help discrediting President Reagan. Many would consider this treason or at least colluding with the Russians, but for Kennedy, it was just more anti-American opportunism.

Even before his death, Democrats saw in Ted a model. Like Kennedy, they would do all they could to change the composition of the American electorate. If permitting illegal immigration across our southern borders was necessary, they would justify it as compassion. When Teddy died in 2009, the Democrats tried to give him the equivalent of a state funeral. When the rest of America ignored the event, the Democrats felt more hate, bitterness, and determination to honor Saint Teddy’s legacy.

If you look at the modern Democratic Party and see hatred, bitterness, and victimhood, credit the Father of it all: Ted Kennedy.