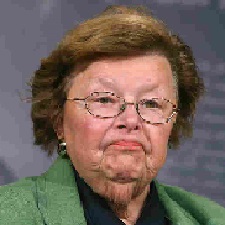 Mikulski said at a Senate hearing Wednesday (January 20, 2016) that she wanted to avoid getting “involved in constitutional arguments.” The only problem is that the hearing in question dealt with President Obama’s recent executive actions on guns, which many believe infringes on Americans’ Second Amendment rights.

“I look forward to…listening to the attorney general and listening to this wonderful panel that you’ve invited to participate today,” Mikulski, a Democrat and ardent supporter of gun control, said in her opening remarks ahead of a Senate Commerce, Justice, Science, and Related Agencies Subcommittee hearing, which heard testimony from the treasonous Attorney General Loretta Elizabeth Lynch.

“So let’s solve the problem,” Mikuski urged. “Let’s not get involved in constitutional arguments, and let’s help our American people be safe and secure in their home, their neighborhood, their school and their house of worship.”

Earlier this month, Obama announced that his administration will force more gun sellers — even low-volume sellers — to obtain licenses and to conduct background checks. The initiative, which was developed in part by Lynch, expands the category of gun sellers considered to be “in the business” of selling firearms.

Republicans and gun rights advocates criticized the executive action, alleging that it infringes on the Second Amendment right to keep and bear arms.

And as Republican senators at Wednesday’s hearing showed, they were unwilling to heed Mikuski’s request to avoid the constitutionality of Obama’s action.

“The department is on notice,” Alabama Sen. Richard Shelby ﻿told Lynch. “This subcommittee will have no part in undermining the Constitution and the rights that it protects.”

In conclusion, Barbara Ann Mikulski is clearly one of the main players within the Washington rat nest of traitors.

Barbara Ann Mikulski retired and is no longer a Senator as of January 3, 2017.